In my first article recapping the BizTalk Summit 2015, I said I would revisit the topic of triggers for those of you wanting to build out custom API Apps that implemented either of those patterns.

After working through the official docs, and reviewing the code presented at the BizTalk Summit 2015 in anticipation of our upcoming Cloud-Based Integration Using Azure App Service class, I decided to take a little bit of a different direction.

Rather than do a write-up both here, and in hands-on-lab form within the class of writing a bunch of custom Swashbuckle operation filters for generating the appropriate metadata for a Logic App to properly consume an API App that’s trying to be a trigger, I decided to write up a library that just made it a little bit easier to create custom API Apps that are consumable from the Logic App designer.

How did I go about doing that? Well Sameer Chabungbam had mentioned in his presentation that a more elegant solution might be to use attributes for friendly names and the like. So I went in that direction, and made attributes for all of the stuff that the Logic App designer needs to have in a certain way (really anything that involved vendor extensions in the generated swagger). What do we do with all of those attributes? Well, we uh, read them in custom operation / schema filters of course! So yes, I did have to write some custom filters after all, but now you don’t have to!

I rolled all of the code into a library that I’ve named the T-Rex Metadata Library1. The library is available as a NuGet package as well that you can add directly to your API App projects within Visual Studio 2013.

So how can we use that to make custom triggers? I’m glad you asked. Let’s get right into it.

The easiest kind of trigger to implement is a polling trigger. A polling trigger is polled by a Logic App at a set polling interval, and is asked for data. When the trigger has data available, it is supposed to return a 200 OK status with the data contained in the response body. When there is not data available, a 202 Accepted status should be returned with an empty response body.

You can find an example of a polling trigger over here. This polling trigger takes in a single configuration parameter named “divisor” and when polled will return data if and only if the current minute is evenly divisible by the divisor specified (kind of silly, I know).

So, how do I separate sample from reality and actually build one?

Steps for Creating a Polling Trigger

After you publish your API App, you should be able to use it as a trigger in a Logic App. Here’s what the sample looks like after being deployed: 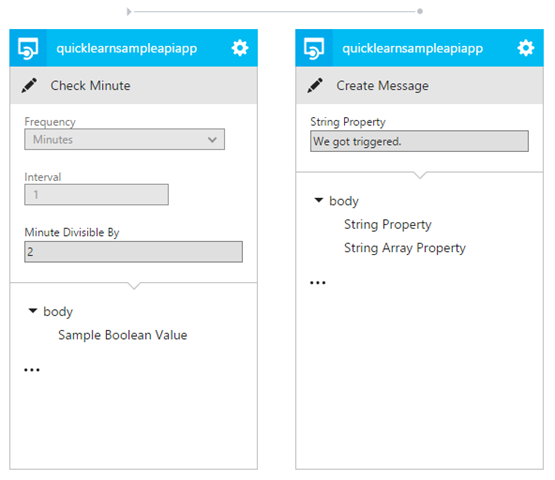 In my next post, I’ll turn my focus to custom push triggers. For now though, I need to rest a little bit to get ready for 2 days of teaching followed immediately by Build 2015! It’s going to a long, yet quite fun week this week!

Until next week, take care!

1It was named this so that it would comply with the latest trends of fanciful library names, and so that I could justify naming a method ReleaseTheTRex. If you believe the name too unprofessional, let me know and I may add a TRex.Enterprise.Extensions namespace that includes a more professional sounding method name which simply calls into the former.