We’re living in exciting times, where releases of new functionality of all of our favorite software (e.g., Logic Apps, Visual Studio Team Services, and BizTalk Server) isn’t happening every 2 years, it’s happening every 2 weeks. With all of the benefits that such a release cadence brings, it also introduces the dilemma of how to both be productive with the technology, and keep up to date with all of the new features.

For example, while I was at the Integrate conference this year in London, many asked how it’s possible to keep our live 5-day Logic Apps class up-to-date. “Certainly it must be out-of-date if it’s not small recorded videos, right?” Actually, we update the class before each run to incorporate the latest product updates.

In this post, I want to share a strategy that we at QuickLearn have found works to stay on top of the latest technology changes, and give you the tools to implement it yourself.

The first step in working towards staying up-to-date with the latest and greatest a technology offers will be locating the ever-evolving list of what’s new. Microsoft maintains a feed of new features for Logic Apps, and even a feed of new features for Visual Studio Team Services (another technology that we teach here). The feed for Logic Apps will be updated less frequently than the listing of features in the Azure Portal, however.

Let’s use one of those feeds, and build a Logic App that notifies us when there is a change by using the RSS trigger to queue up an instance of that Logic App whenever a new item is published to the RSS feed.

At QuickLearn, we add research items for continuous education as Product Backlog Items in VSTS. They sit alongside the core work of building products (in our case, courseware), but serve to carve out some capacity to build up the team itself. Each item carries with it the responsibility to quickly research and/or build a proof of concept using the new feature, or features, whilst also taking extensive notes to share with the team. I made all of my notes public for the release of BizTalk Server 2013 and BizTalk Server 2013 R2, and I wrote them directly in Live Writer to facilitate this. These days, I use OneNote for the same purpose.

Your organization might not want to allocate company time for such efforts. If so, you can always setup a personal VSTS account and do such research and experimentation on your own time.

Thankfully, Logic Apps has a connector for VSTS, which makes the task of building up a learning backlog an easy task to accomplish. The work items themselves will serve as our notifications of new product features: 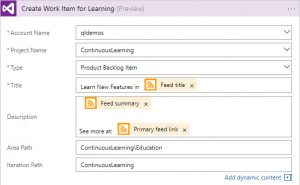 Working from the Continuous Learning Backlog

Once the Logic App runs (just the single trigger and single action), it produces backlog items to learn about new features in Logic Apps. In the way that I’ve configured it, it runs every 7 days and will automatically populate your backlog with any new features it finds. Your team can decide to investigate and/or not investigate these features further depending on what they are, and/or if they will help in future efforts on your projects.

If any features in the release sound helpful and warrant further investigation, you can break out as many tasks as are required to investigate applicable features to see what value you can derive from them. I like taking the approach of building a 30-60 minute proof of concept for each feature, rather than just reading about it. Each team member can take a relevant feature for a test drive, and present it during sprint review. 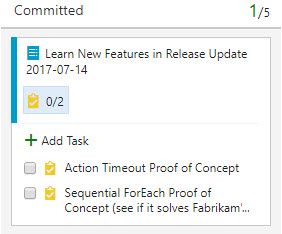 For QuickLearn, backlog items like this are a common occurrence. We update our Logic Apps class before each delivery to incorporate all of the latest and greatest features that we can fit. I always love the week of class, being able to share all of the fun and fresh goodies that the product team has cooked up.

I Need to Get Up to Speed Now

If you want a leg up, and a way to get up-to-speed quickly, there are some good opportunities coming up to do just that:

I’ll be speaking at each of those, and hope to see you there! Good luck on your continuously expanding cloud integration journey!